Bringing a new car to the 2016 NASCAR XFINITY Series (NXS) season finale at Homestead-Miami Speedway, Blake Koch began practice on Friday unsure of what to expect out of his No. 11 LeafFilter Gutter Protection™ Chevrolet Camaro. However, trying to work tweaks out of the new chassis, Koch ended both practice sessions 17th-fastest.

Rebounding nicely in qualifying though, Koch made it to the third round and snagged a 12th-place starting spot for Saturday afternoon’s NXS 300.

Spending the initial laps of the 200 lap race “lacking grip,” Koch was able to maintain a spot in the top-15 until the caution came out on lap 25, allowing him to hit pit road for the first time that day. Receiving four tires, fuel and a track bar adjustment under caution, Koch returned to the track for the restart in the 14th-position.

However, shortly after the field went back to green-flag conditions, it wasn’t long before Koch radioed into his Kaulig Racing™ team that he was still struggling with the handling of his No. 11 Chevrolet. Despite his best efforts, Koch slipped back to 20th, trying to hang on to a car that was “way too loose on the throttle.”

Not wanting to lose any more ground, crew chief Chris Rice called Koch down pit road, under green, on lap 78. Koch got four tires, fuel, and another track bar adjustment to tighten him up before he was sent back on his way.

Just as green-flag pit stops were cycling through for the leaders, the third caution of the race was displayed on lap 90, catching Koch one lap down to the leaders in the 18th position.

With minor adjustments not making a difference to Koch’s No. 11 LeafFilter Gutter Protection Chevrolet Camaro on previous stops, Rice chose to make a big swing at the chassis’ handling under caution, as well as elected to get four fresh tires and fuel.

Still trying to make up all the ground he could, Koch battled the remainder of the 200-lapevent with a Chevrolet Camaro that was just “way too loose” to the point that he felt like the car just “wasn’t beneath him.”

Hitting pit road three more times before the checkered flag flew, all under caution, Rice continued to call for major adjustments to try help Koch out, but nothing seemed to make a difference. Despite a total team effort the entire weekend, Koch finished the NXS 300 in 20th, one lap down, but secured a career-best seventh-place finish in the 2016 NXS driver point standings.

Kaulig Racing and driver Blake Koch look forward to returning to the NASCAR XFINITY Series in 2017 in search of a championship.

“We had a shot at fifth in points, but we didn’t have a good weekend. We tried super hard, though. I’m proud of everything this team has accomplished this season. A top-10 in points is something to be proud of. We’ll end the season thinking about Phoenix, because that was a good race while this one wasn’t so great. These guys now have time to work in the off-season, while last year we didn’t even have an off-season. We’ll be even better next year.” 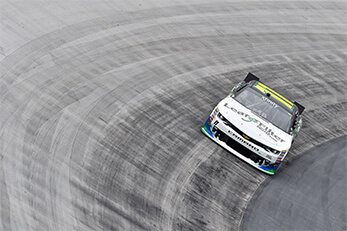