Every sport has their own superstitions, and NASCAR is no exception! Throughout the years, racecar drivers in every division form the main NASCAR series to the XFINITY series (including Blake Koch and the LeafFilter Racing team) have embraced these seven superstitions, whether lucky or unlucky!

The number 13 is commonly associated with bad luck both on and off the track. In fact, it’s so common, there’s an actual name for it. Triskaidekaphobia (try to say that three times fast!). It is extremely rare for a driver representing the number 13 to find success on the track. While Sprint Cup drivers Johnny Rutherford and Mark Dobmeier have found moderate achievements with the number, the majority of others, like Casey Mears, have dealt with nothing but misery after switching to the dreaded digit.

NASCAR rarely allows the number 13 to be used in any division. Other racing circuits, like Formula 1, don’t ever allow the number to be put to use. The 13th starting position is also considered a bad omen for the race ahead. IndyCar driver Roger McCluskey even avoids hotel rooms with numbers that add up to 13 (like 706 or 94). The general consensus is to steer clear of the number 13 at all costs.

2. It’s not so easy being green

Green is traditionally associated with money, serenity, nature, and, well, plain old good luck, but many NASCAR drivers don’t feel the same. It all started in 1920, when Gaston Chevrolet was tragically killed in a crash involving his green car. Drivers have been known to refuse even a small stripe of green on their car, and avoid wearing green clothing (including undergarments!) on race days. As you probably already guessed, we don’t really subscribe to this superstition here at LeafFilter Racing.

Over time, this particular NASCAR superstition has somewhat lessened. Many sponsors include green in their branding, and their logos must be featured on the driver’s car. This is the case for Blake Koch’s number 11 LeafFilter car. Bright, cheery green is a prominent color on the car, but, aside from the occasional (and expected) wreck or two, it hasn’t impeded his success in 2016! With many top 15 finishes and a solid standing in The Chase, Koch is finding that green might just be his lucky color!

From near-death experiences to spot on intuition, some seriously spooky things have happened at Talladega. It is a notoriously tricky track, but there might be more to it than that. The track is rumored to have been built on top of land that belong to the Abihka Tribe in the 19th century. Legends of cursed Indian burial grounds definitely sound like something out of a Stephen King novel, but is there something to it? Maybe not. The track is notoriously fast and drivers tend to run tight on the 2.66 mile stretch, making crashes much more likely to happen at Talladega.

Peanuts are taboo at the racetrack, and for good reason! In the past, when racecars were serviced below the grandstands, peanut shells that dropped under the bleachers made their way into the cars. Inevitably, these peanut shells could be seen strewn on the racetrack after accidents. The association caused fans and drivers alike to blame peanuts for their misfortune. It is said that after a losing streak, the Robert Yates Racing team threw away all peanut products in their facility. Seemingly miraculously, the losing streak was broken the following race.

But, of course, there is an exception to every rule. Jonny Sauter’s No. 98 Toyota was a big winner in the Camping World Truck Series of 2013 when Carolina Peanut Co. was his primary sponsor. With references to peanuts all over his truck, you’d think bad luck would follow. However, out of 22 races that season, he clinched three wins, and a whopping 14 top-ten placements! His next paint scheme wasn’t quite as successful.

So are peanuts really bad luck? All we know for sure is that they drive some NASCAR fanatics a little nutty.

5. Facial hair for the win!

Many drivers subscribe to the belief that shaving before a race is a bad idea. This all started in 1936 when Sprint car driver George “Doc” MacKenzie tragically died in an accident after shaving before the race. Those close to him believe he “jinxed” himself by shaving, although there may have been other factors in the crash. Nonetheless, drivers tend to avoid shaving before races.

If you’ve followed the NASCAR XFINITY Series 2016 Chase, you know that number 11 driver Blake Koch has followed suit and vowed to cease shaving until he is disqualified from The Chase. The unconventional strategy seems to be working for him so far!

That facial hair can sometimes get a little itchy under the heavy helmet, which can be pretty distracting when you’re trying to race at high speeds. But with the history behind this superstition, why toy with luck?

This is another common superstition, even outside NASCAR. The roots of this superstition within NASCAR can be traced to Dale Earnhardt during the 1998 Daytona 500. The famous driver fulfilled a Make-A-Wish request before the race, and received a penny for luck from the recipient of the wish. Earnhardt decided to glue the lucky penny to his dashboard after their meeting, and went on to win the race. That penny brought him good fortune until he parted ways with that car.

Whether or not you believe this NASCAR superstition, what’s the harm in carrying a penny with you on race day? That good luck might rub off on your favorite driver!

This one isn’t as widely believed, but is still part of the NASCAR superstitions. Famous NASCAR driver Rusty Wallace is terrified of tails…coins that land tails-up, that is. Wallace is rumored to have checked all the coins a crew member dropped on the ground before an ARCA race his son was participating in. He wanted to make sure none of the coins had landed tails-up, but claims he must have missed a coin because Steve wrecked during the race. However, with no other drivers claiming this as a factor in their performance, we can’t make heads or tails of this superstition. 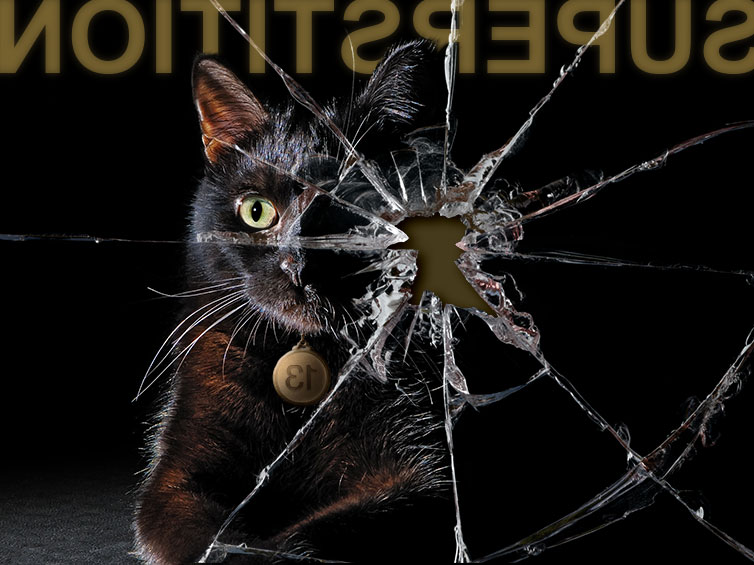