www.leaffilter.com
LAS VEGAS, Nev. (March 12, 2017) – After a rough start to the 2017 season, NASCAR XFINITY Series (NXS) driver Blake Koch rebounded to finish 12th at Las Vegas Motor Speedway (LVMS) on Saturday afternoon and advanced to 13th in the points standings. The Kaulig Racing driver started 19th and worked through several chassis adjustments throughout the day before fighting his way into the top 15 at the end of the 200-lap event.

“We felt like this was really our first true race of the year after getting damage early at Daytona and ending our day on Lap 2 last week at Atlanta,” said Koch. “We really got some insight into how we need to run these races with the new downforce package and were able to adjust throughout the day to get to where we needed to be. I can’t thank my guys enough for never giving up, as well as LeafFilter Gutter Protection and Lifting Gear Hire for supporting us this weekend. We gave it our all and hope to carry this momentum over to Phoenix next week.”

Koch and the team started off the weekend with two practice sessions on Friday. After working on the car’s handling in first practice, Koch and the team were able to make improvements to average top-10 lap times in the final practice.

On Saturday morning, Koch advanced thorough the first two rounds of group qualifying and settled into a 19th-place starting position.

Just six laps after the field took the green flag on Saturday afternoon, the caution was displayed while Koch was in the 20th position. Crew Chief Chris Rice told his driver to save fuel and to stay out. Soon after the next restart on Lap 10, Koch reported that the car was tight on exit. He was able to hold on until the team was able to pit at the end of the first stage at Lap 45.

Koch ended Stage 1 in the 23rd position and asked the team to help him with his front turn. Rice brought Koch down pit road under the caution period for a spring rubber, wedge adjustment and an adjustment to the right-front of the No. 11 machine. Koch received the Lucky Dog, and was able to restart on the lead lap on Lap 53.

The caution was displayed again on Lap 71 while Koch ran 22nd. Koch reported that his car was better, especially in clean air. He came down pit road under caution for another adjustment in the front end of the car, a track bar adjustment and fuel. He restarted 20th with 15 laps remaining in Stage 2.

With 11 laps remaining in Stage 2, the field fell under caution again. Koch reported that he had lost rear grip, warranting a pit stop for fresh tires and fuel. He restarted 23rd with six laps remaining in the stage.

At the end of Stage 2, Koch was scored 21st and discussed strategy with Rice. They decided not to pit, putting Koch 12th for the restart on Lap 98. The race was relatively quiet until the team’s green-flag pit stop for fresh tires and fuel with 60 laps remaining. After returning to the track, Koch reported he was tight but was able to change his line to adjust to the condition.

A caution with 40 laps remaining gave Koch and Rice a chance to discuss the previous adjustment. Koch said that he felt it had hurt his entry and could use some side bite. The team took the wave around to get back on the lead lap.

Another caution with 30 laps remaining allowed the team to pit for track bar and air pressure adjustments, fresh tires and fuel, and to add some tape on the grille. Koch restarted 19th and had made his way up to 17th by the last caution with nine laps remaining in the event.

Koch restarted from the 14th position with four laps remaining at LVMS and persevered to gain two positions, crossing the finish line in the 12th position. 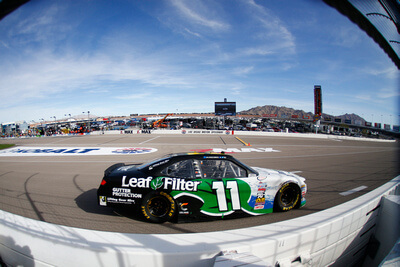