LEXINGTON, Ohio (August 12, 2017) – Kaulig Racing driver Blake Koch earned a track-best start of third and a track-best finish of 11th on Saturday at Mid-Ohio Sports Car Course. The West Palm Beach, Fla. native won Stage 1 of the event, finished 10th in Stage 2 and rebounded from an incident on Lap 51 to finish 11th.

“It was awesome to win a stage today in front of all of the LeafFilter Gutter Protection employees who came out to their home track to support our team,” said Koch. “We had such a fast car this weekend and the team did a great job repairing the damage to the right rear to carry us to the finish. After a great points day, I’m excited to head to Bristol next week to get back to oval racing on a short track.”

After arriving in Ohio on Thursday to visit LeafFilter Gutter Protection’s corporate headquarters in Hudson, the team arrived at Mid-Ohio Sports Car Course on Friday ready to lay down some fast laps in practice. Unfortunately, severe thunderstorms cancelled all on-track avitivty for the NASCAR XFINITY Series on Friday, moving the team’s sole practice session to Saturday morning. Koch finished eighth in that practice session and carried that confidence into qualifying Saturday afternoon, scoring a track-best starting spot of third.

After the drop of the green flag, the field made one complete lap before the race was slowed by caution for oil on the track. Koch maintained the third position through a lengthy clean-up period. The race returned to green on Lap 8, but fell under caution and eventually a red flag with five laps remaining in Stage 1. When the red was lifted, the leader pitted and Koch assumed the second position for the restart with just two laps remaining in the stage. With just one lap remaining, Koch took the lead and maintained it to win Stage 1, capturing 10 stage points and one playoff point.

Crew chief Chris Rice brought Koch down pit road under the stage caution for four fresh tires and fuel. A delayed entry into the pit box relegated Koch to a 24th-place position for the restart on Lap 23 to begin Stage 2.

Just five laps after the restart, Koch had raced his way up to the 19th position and was still running faster lap times than the leader.  He managed to avoid a wreck in front of him on Lap 32 as he climbed to the 14th position. He continued to pick off cars as the stage went on, eventually making the pass for the 10th position just before the stage ended on Lap 40. Koch earned one bonus point for his 10th-place stage finish.

Koch visited pit road under the stage caution for four fresh tires, fuel and to add some tape on the grille. He restarted ninth on Lap 44 to start the final stage of the Mid-Ohio

The caution was displayed again on Lap 48 while Koch was running eighth.  The field returned to green on Lap 51. As the field worked Lap 51, Koch was tagged from behind and sent spinning across the course, collecting several cars and suffering severe damage to the right rear of his No. 11 Camaro. The team pitted twice to work on the damage before running out of time on the five-minute crash clock. With all parts and pieces on the No. 11 machine secured, Koch restarted 31st on Lap 57.

The caution was displayed for the seventh time on the restart lap, but Koch was able to gain several positions, putting him 23rd when the field returned to green on Lap 61. Koch continued to fight for position, advancing to the 16th position by the eighth caution flag on Lap 64.

Soon after the restart with eight laps remaining in the race, Koch had to maneuver through the grass to avoid a wreck in front of him. The field was eventually red flagged for the second time. When the race returned to caution, Koch was able to remove some of the grass from his grille by tucking under another car’s bumper. He restarted 13th with five laps remaining at Mid-Ohio.

Koch continued to pick off cars in the closing laps of the race, making bold moves to gain track position. After an eventful day, Koch eventually crossed the finish line 11th at the end of the Mid-Ohio Challenge at Mid-Ohio Sports Car Course.

Koch improved his track-best start by 10 positions and his track-best finish by one position today at Mid-Ohio. He earned his second stage win of the season, securing another playoff point for a total of two for the season. 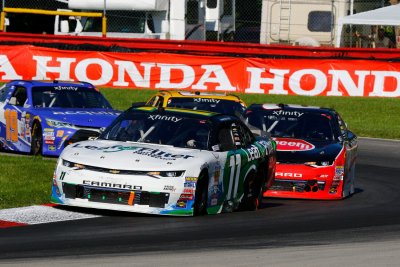