www.leaffilter.com
CONCORD, N.C. (May 27, 2017) – Kaulig Racing driver Blake Koch tied his career-best start of 18th at Charlotte Motor Speedway (CMS) on Saturday before racing his No. 11 LeafFilter Gutter Protection NASCAR Salutes Chevrolet to a 19th-place finish in the NASCAR XFINITY Series (NXS) Hisense 4K TV 300.
“We were really fast on the long run while we were running the top, but the end of the race came down to short runs, which didn’t really help us gain position,” said Koch. “I look forward to getting to Dover next week since it’s one of my favorite tracks and plan to get back to running where we know we can.”
The team used two practice sessions on Thursday to dial in the No. 11 LeafFilter Gutter Protection Chevy, finishing 12th in first practice and 14th in final practice. This particular chassis was run in a test earlier this month at CMS, but received a makeover in honor of NASCAR’s Salutes initiative, honoring America’s military. Koch’s red, silver and blue LeafFilter Gutter Protection Chevrolet carried the name of fallen U.S. Air Force Captain Nathan Nylander on the passenger-side door.
Racing in honor of Captain Nylander, Koch fired off from the 18th position when the green flag flew on the first 45-lap stage. After just one lap, the field fell under caution as Koch ran 14th. After a couple of quick yellow-flag laps, the field returned to green on Lap 7 with Koch in the 11th position.
By Lap 16, the caution flew again while Koch ran 15th. He reported to crew chief Chris Rice that the car was a bit free. The field restarted on Lap 20, but the caution flew before a lap was completed. After the impending restart on Lap 25, Koch ran 17th and would eventually end Stage 1 in the 23rd position. At that time, he told Rice he needed an adjustment to make the car tighter.
The team brought Koch down pit road on Lap 48 for four tires, fuel, track bar and wedge adjustments. Koch restarted 28th on Lap 52 and raced his way up to 22nd with 15 laps to go in Stage 2. Koch ended the stage 21st after continuing to fight free conditions on the race track.
Rice brought Koch down pit road under caution for fresh tires, fuel and a track bar adjustment under the caution. He restarted 16th on Lap 97, the beginning of Stage 3.
The fourth caution of the race flew on Lap 103 while Koch ran 17th. He reported to the team that the last adjustment really helped his entry into the corner. He restarted 17th on Lap 108 and reported a few laps later that the car’s handling had swung to the tight-side at the beginning of a run. By the fifth caution on Lap 114, Koch reported that the car felt better. He restarted 24th on Lap 129.
By the next caution on Lap 158, Koch had raced his way up to 18th. The team made a fast pit stop under caution for fresh tires, putting Koch 12th on the restart with 37 laps remaining.
The field saw four cautions in the remaining laps of the event. Koch narrowly missed one of the incidents, maneuvering through the smoke without receiving damage. Despite having a better-handling car on the long-runs, Koch persevered to cross the finish line 19th at CMS.
Koch is scored 10th in the NXS Championship standings after Saturday’s race at Charlotte Motor Speedway. Koch and the No. 11 LeafFilter Gutter Protection team will be back on track Saturday, June 3rd at Dover International Speedway. 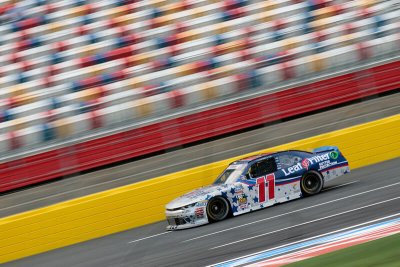