“We’ve really closed out these last few races phenomenally,” said Koch. “Our beginning and middle of the race haven’t been exactly what we hoped for, but I’m happy to walk away from Fontana with a top-15 and make some gains in the points standings. We had great speed all weekend and I look forward to picking up where we left off in when we return to Texas in a couple of weeks.”

Koch and the No. 11 LeafFilter Gutter Protection team posted top-10 speeds in both NXS practice sessions on Friday afternoon before scoring an 11th-place starting position Saturday morning for the 150-lap Service King 300 at Auto Club Speedway. The track conditions for Saturday’s event wavered between cloud-cover and full sunshine throughout the 300-mile event.

After taking the green flag on the first 35-lap stage from the sixth row, Koch reported that his car was loose. He maintained the 21st position until the caution flag flew for the first time on Lap 29. Crew chief Chris Rice brought Koch down pit road under the caution flag to correct the loose condition with four fresh tires, fuel, wedge and air pressure adjustments. Koch restarted 25th with one lap remaining in Stage 1.

At the end of the first stage on Lap 35, Koch had made his way up to the 19th position and reported that the car fired off better on the last run. The team stayed out under the caution period to restart 19th on Lap 41, the start of Stage 2.

By Lap 60, Koch reported that the car had become a bit too tight as he raced for the 21st position. He held on to finish 20th when Stage 2 ended on Lap 70 before heading to the pits for his second pit stop of the day. On Lap 73, the team pitted for fresh tires, fuel, track bar, wedge and air pressure adjustments. The quick work by the No. 11 crew put Koch 17th for the restart to signal the beginning of the final stage on Lap 77.

Four laps into the final stage, the caution flew while Koch was running 24th. He said the car was great at the beginning of the run, but he needed an adjustment to maintain that handling. Rice brought Koch down pit road under caution on Lap 84 for fresh tires, track bar and air pressure adjustments. Koch restarted 25th on Lap 88.

The team had another chance to make adjustments when the caution flag was displayed on Lap 94. Koch came to the attention of the crew for fresh tires, fuel and a wedge adjustment. One lap before the field returned to green, Rice brought Koch down pit road once again to top off with fuel. Koch restarted 21st on Lap 104.

Just two laps after the restart, the caution was again displayed. Koch stayed out to gain track position, restarting 12th with 26 laps remaining in the race. He settled into the 16th position before the field was slowed by a caution with just 10 laps remaining in the race. Koch reported that the car was still a bit free, warranting another stop on Lap 143 for tires, fuel and an air pressure adjustment.

The field took the green flag for the final time with four laps remaining in the Service King 300. Koch battled side-by-side in the closing laps to cross the finish line 12th and tie his existing career-best finish at Auto Club Speedway. 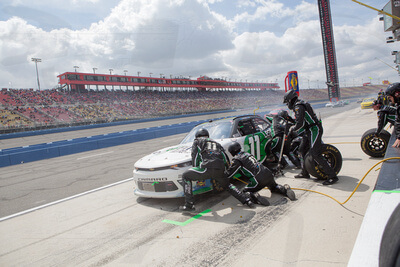