HAMPTON, Ga. (March 4, 2017) – Kaulig Racing driver Blake Koch finished 40th at Atlanta Motor Speedway (AMS) on Saturday after starting 25th and gaining six positions on the start before getting caught in an incident on Lap 2. The impact crushed the radiator of the No. 11 LeafFilter Gutter Protection Chevrolet, forcing Koch to retire from the race.

“Our team has been working so hard to make our cars better,” said Koch. “We found some speed yesterday but have had our work cut out for us all weekend. Our team doesn’t deserve a weekend like this but I can’t say enough about them and the support of LeafFilter Gutter Protection. We will rebound next week in Vegas.”

Koch and the team started off the weekend with three practice sessions on Friday. The team made changes throughout the sessions and were able to improve on the No. 11 LeafFilter Gutter Protection Chevrolet by the final practice session of the day.

On Saturday morning, Koch reported he was a little loose during his qualifying, settling into a 25th-place starting position for Saturday afternoon’s 163-lap event.

Eager for the drop of the green flag, Koch and Crew Chief Chris Rice thanked the team for their hard work all weekend. By the time the first lap was completed, Koch had gained six positions to make his way up to 19th. On the following lap, a car in front of Koch spun and slid down the AMS banking, leaving no room for Koch to avoid the spinning car.

“On that incident, I saw Ty (Dillon) spinning and I was really loose into Turn 1 on that lap so I was trying to slow down as much as I could to sneak by on the bottom. At that point, he was rolling down the hill and I had nowhere to go.”

The contact caused heavy damage to the front end of the No. 11 LeafFilter Chevrolet Camaro, crushing the radiator. Koch came down pit road to assess the damage, which was decidedly too substantial to fix within NASCAR’s allotted timeframe of five minutes. 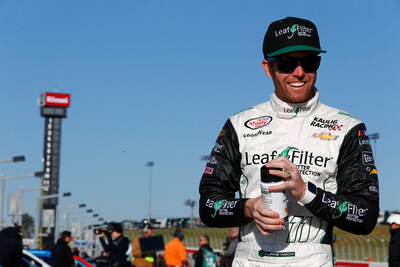