www.leaffilter.com
NEWTON, Iowa. (June 25, 2017) – Kaulig Racing driver Blake Koch finished 25th at Iowa Speedway on Saturday night after getting caught a lap down when an an untimely caution was displayed on Lap 218, just as the team had completed their final green-flag pit stop of the race. Koch was running in the top 10 before the series of pit stops, but was not able to gain ground once the race returned to green with 21 laps to go.

“We made great adjustments all weekend and had a really good car by the last stage of the race, but just had bad luck with the caution coming out after we pitted,” said Koch. “I can’t thank my No. 11 LeafFilter Gutter Protection team enough for all of their hard work this weekend. Our finish definitely is not a reflection of how good the car was or the work we put in.”

Koch qualified 13th on Saturday afternoon for Saturday night’s race under the lights at Iowa Speedway. After fighting the handling of the car during Friday’s two practice sessions, the team changed the setup overnight prior to qualifying. Koch reported the changes were good as he made it through to the second round of qualifying.

After firing off from the 13th position, Koch had raced his way up to 11th by the time the first caution was displayed on Lap 24. At that time, he reported to the team that he needed help getting into the corners. The team did not pit under the caution, leaving Koch 11th for the restart on Lap 30.

When the stage ended on Lap 60, Koch took the yellow/checkered flag from the 12th position. Crew chief Chris Rice brought Koch down pit road under the caution on Lap 64 for fresh tires, fuel and a track bar adjustment. The team gained a spot on pit road, putting Koch 11th for the restart on Lap 69.

The third caution of the race was displayed on Lap 78. Koch reported that he may have run over some debris, but he continued to soldier on, restarting 15th on Lap 86. As the run went on, Koch reported that the car was really loose. A caution with eight laps remaining in Stage 2 gave the team a chance to make adjustments. Koch pitted from the 19th position on Lap 114 for fresh tires, fuel, track bar, wedge and spring rubber adjustments. He restarted 25th with two laps remaining in stage two before eventually ending the stage 20th.

Koch restarted 14th on Lap 129 and had raced his way up to 11th by the next caution on Lap 144. After the restart, the caution flew again on Lap 161. He restarted 12th on Lap 169 but continued to gain ground, breaking into the top 10 on Lap 189. With 50 laps to go, Koch made the pass for eighth and ran there until it was time for a green-flag pit stop on Lap 116. After a clean four-tire stop, Koch returned to the track just as the caution was displayed. Because of where Koch was in the pit cycle, he was trapped a lap down and in the 26th position for the restart with 21 laps to go.

The caution was again displayed with 17 laps remaining as Koch fought his way back through the field. Unfortunately, not enough time was left to gain much ground. Koch crossed the finish line 25th at the end of the 250-lap American Ethanol 250 presented by Enogen at Iowa Speedway. 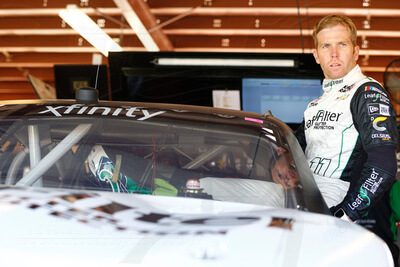